Joint Meeting with BCEPC - A Night with the Orphan's Court Judiciary 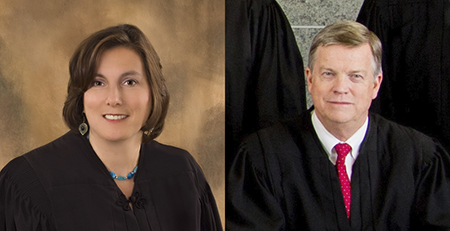 Join us for a panel discussion about the Bucks and Montgomery County Orphan's Court.

Judge Fritsch received his J.D. degree from the Dickenson School of Law and his B.A. from Denison University.

Judge Murphy served as a law clerk to the Honorable George C. Pratt of the United States Court of Appeals for the Second Circuit, then served as a trial and appellate litigator in the Civil Division of the United States Department of Justice, and then as in-house counsel to a national non-profit organization advocating for women’s rights.  Judge Murphy practiced law at Morgan Lewis in Philadelphia and at Heckscher, Teillon, Terrill & Sager, in West Conshohocken, Pennsylvania.   She is a frequent lecturer on topics including Guardianships, Access of Justice for Older Adults, End of Life Decisions, Orphans’ Court practice and procedure, and the Pennsylvania Uniform Trusts Act.

Thank you to our meeting sponsors: